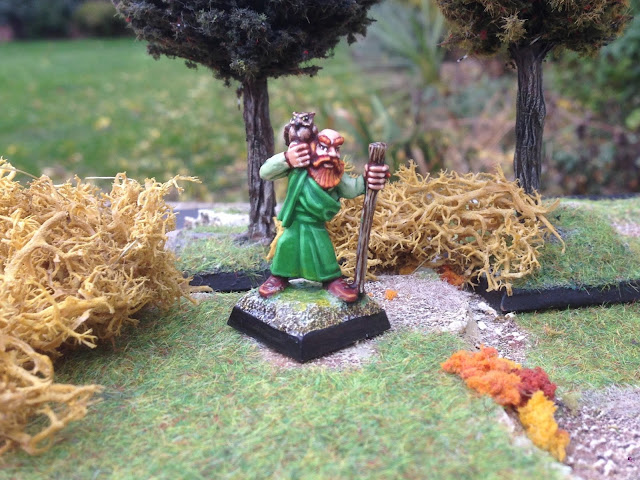 During my last visit to the Foundry, I was lucky enough to pick up the Time Warped Wizards set and painted up two of the Russian looking models for the City of the Lead project. Now, I have switched my plans around and opted to go with Skaven (and more on that project in another post) but I was keen to press on with painting up the rest of the figures in that set.

Being a fan of a project with an over-riding theme, I decided to paint a figure for each of the Colleges of Colour Magic mentioned in two articles published in '80s White Dwarf. Here are the articles if you are unfamiliar with them.

Collages of Magic by orlygg on Scribd

Now having studied the Time Warped Wizards, there are several clues that lead me to thinking that some of the models may well have been designed with the Colour Magic background in mind (more of those ideas in a later post) though the models Foundry cast up in the summer come from a range of different periods. For example, the model I have just painted is very similar to the 1987 cleric range (or which a number of models saw large scale production) of which I have a number of examples.

Sorting through the seven wizardly models, this figure with his 'druidic' look and owl familiar looked perfect for a Jade Wizard. Always being a fan of old school Warahmmer fluff, I re-read the articles to uncover as much as I could about this particular college's place in Third Edition Warhammer.

A Jade Wizard has an almost symbiotic relationship with the seasons and the agricultural cycle. During the summer months, they are full of energy and enthusiasm as the natural world swells with the sun's warmth. As the year turns and the plants fade and die, so the Jade Wizard's power diminishes and they suffer from a reluctance to use their magical arts. It is no secret that Jade Wizards regularly sacrifice agricultural animals or crops to appease natural deities, though there are darker rumours of human sacrifice in gigantic wicker men - though few believe them possible. 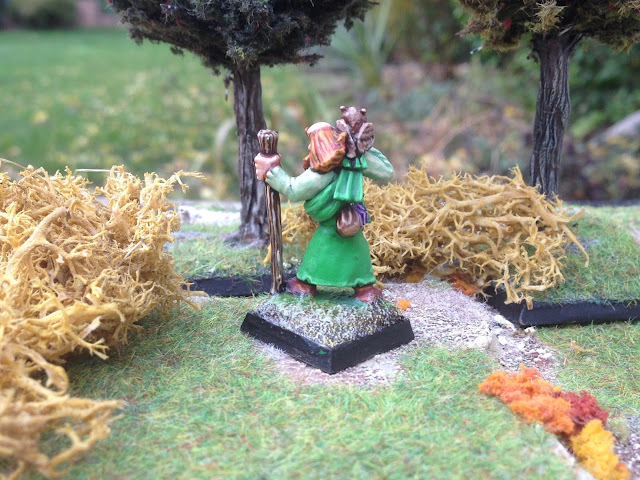 With this background in mind, you will no doubt agree that this miniature is just a perfect choice to represent this college. The countryman's cudgel, the sturdy leather shoes and the druidic toga all fit this theme and it was quite simple to mix two different naturalistic greens for the wizard's clothing. Browns, oranages and purples are colours closely linked with the agricultural world outside my window, so I included them as spot colours here and there too.

I have two further Colour wizards that need my attention on my bureau and hope to have finished them soon. Though, like many of my painting projects this one might just slip away into the ether unfinished and unmourned.

For now, I am just glad that another lovey Citadel miniature is painted and can be added to my collection.
Posted by Orlygg at 03:03