I have been suffering painter's block in recent months. Actually, painters lethargia perhaps would be a better term. I have, as I am sure many of you readers do, an enormous collection of miniatures across a substantial number of different manufacturers, and need not really ever buy another model. But of course, that is not likely to happen! However, I have had some difficulty actually getting anything painted. Its not that I haven't been painting, my Slanneshi models are proof of that, its just that I haven't been happy with the results I am getting.

I've spent weeks trying to get something decent out of the elvish models that I own. But no matter what I do the results are just are not what I am after. I end up with models that are too bright, or too cartoony - or even both! You may remember that I have set out to try and paint a model for each of the entries in the Warhammer Third Edition rule book. I call this project 'The Warhammer Bestiary' but I have languished with the elves for some months. I just could not get decent results.

So I put away the fantasy and thought I might have a crack at something totally different. I spotted an ad in Wargames Illustrated a few weeks back for the Great War Miniatures range (sculpted by Dave Andrews and Aly Morrison) and fancied a crack at something historical. After waiting a week or two, the models arrived and I was very pleased with what I had discovered. That flash was awful though, but the models didn't take long to clean up and I was quickly researching on the internet to find information about what BEF uniforms looked like in 1914. Also, I branched out into a different set of paints, deciding on the Flames of War British Army set before releasing how hard it is to buy paints online these days in the UK!

With my new models in tow and a rather forlorn attitude to painting still hanging over me I knew that I would have to try something different. So I pulled out the Army Painter range of colours I had picked up at Salute last year and set about painting my WW1 models in their suggested style. Now, I don't know how many of you are aware of Army Painter but the premise is simple - have more time to play! After a basecoat, you add the individual colours that your model requires before washing over the miniature with a dip. This dries and produces a shaded model. It takes a short while to finish a model this way. You could leave things just like that if you were so inclined and I expect that a great many do. I need something a bit more sophisticated for my tastes, so I continued to add highlights and other little details to the models. In no time at all, I ended up with a platoon of BEF chaps ready to see off the Bosche with their rapid rifle fire. And, I had enjoyed the process too! I had fun playing around with modern basing techniques and products that I don't wish to use on my Old School Citadel. My efforts are below for those of you interested. 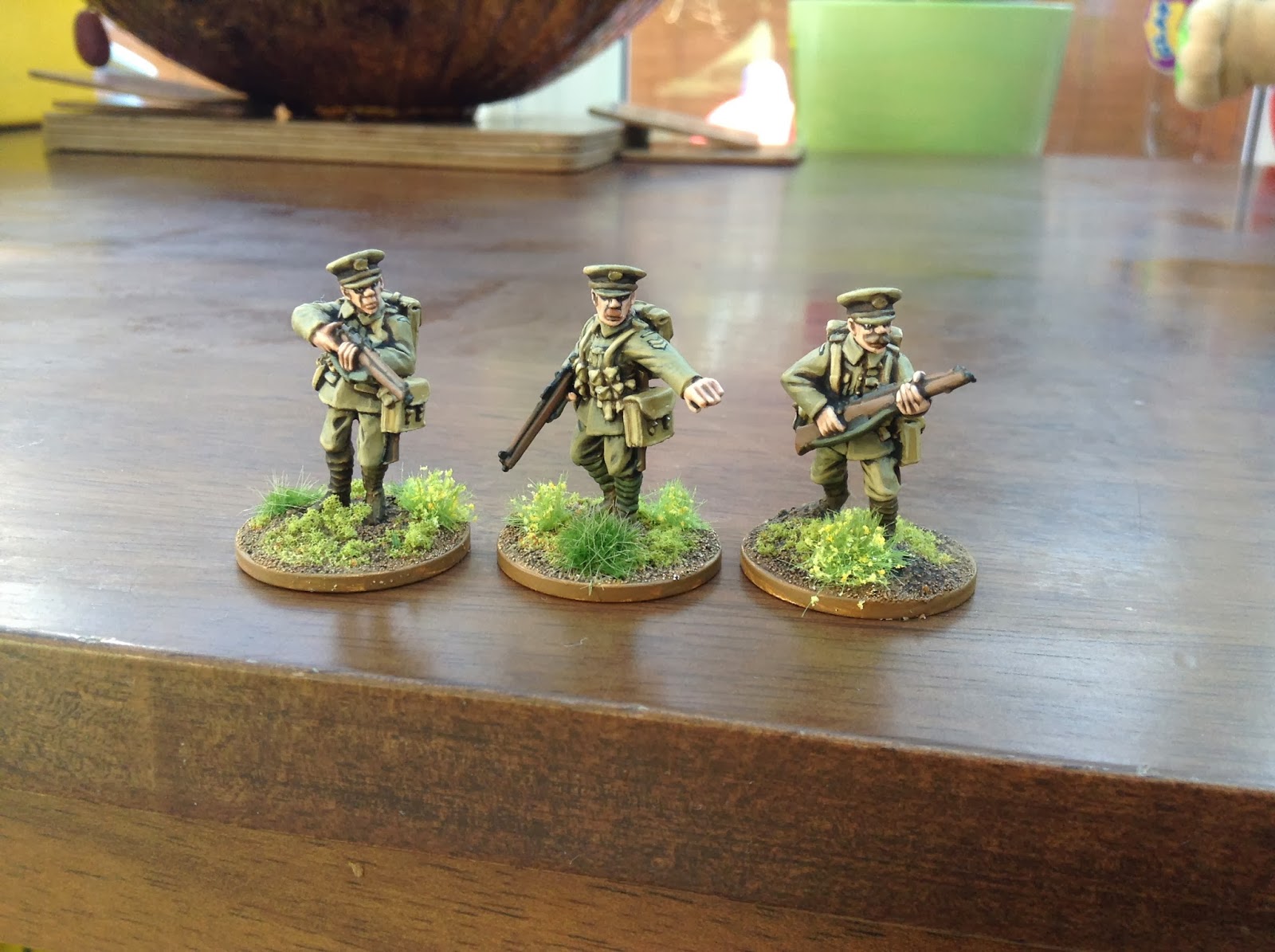 Keen to paint something else that was totally different I opted to begin work on that Saga Warband I bought last April. I chose the leader and had a wonderful few hours trying to capture his aging authority. Amusingly, I ended up with a model who resembled Hulk Hogan. I used the same method as with the WW1 models only I went for a more chalky style base. 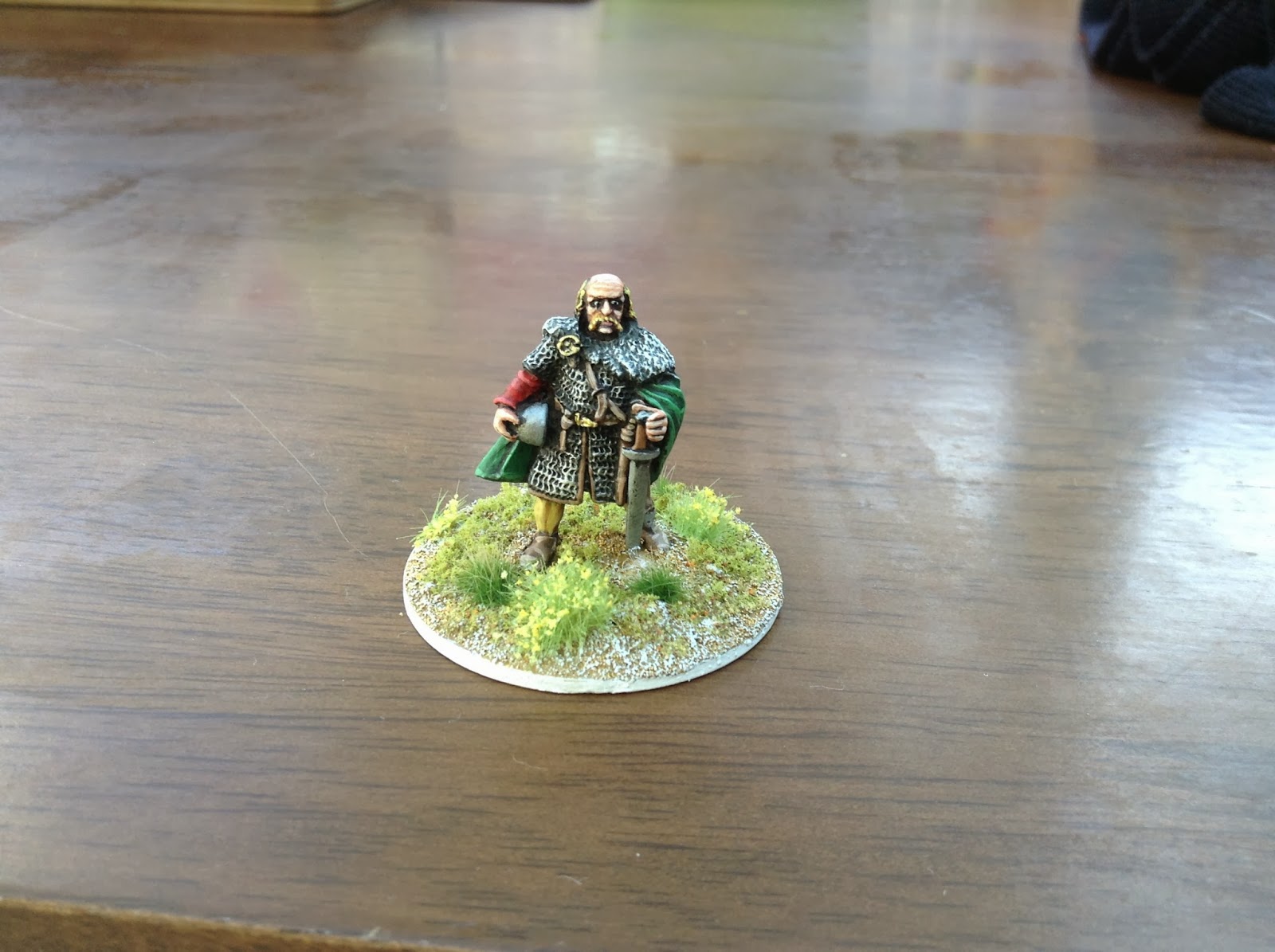 With a fair few good looking (to me anyway) models on the display table, I felt it was time to return to something fantastical. I chose to paint a zombie, thanks to Chico who traded a few with me. I found myself staring at the model for a while, rather reflectively. I was pondering on the reason why I had been so unhappy with my recent paint jobs. It was then that I realised that it was the restricted colour schemes of the Saxon and the WW1 troops that helped make a more successful look and that my previous elvish efforts were too busy. I had been using too many colours and things were looking muddled on my models. So with the zombie, I opted for flesh, white and brown as the main colours. I got painting and a few hours later I had a good looking model, faith in myself restored! 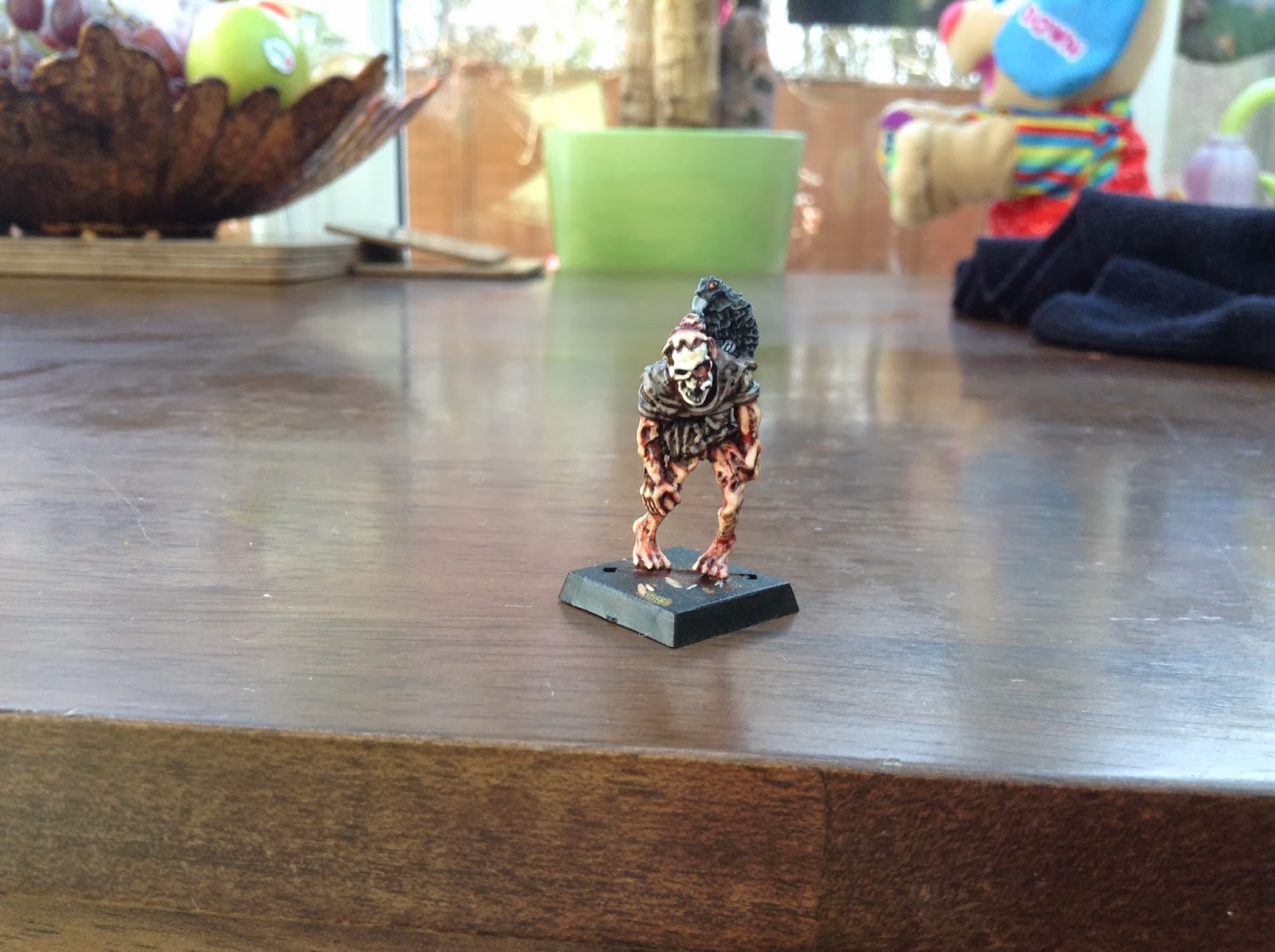 I love the design behind this model. It is my opinion that this is the best zombie sculpt ever produced by Citadel/GW. The lurching gait, the dangling eyeball and the crow picking evilly and the poor soul's brains tell a story of their own, even before this rotting corpse is flung upon the battlefield. Brilliant!

But what to paint next? I cast my eyes over some of the other zombies but they didn't inspire me to produce something exciting. Then I remembered the gigantic lump of lead that was sitting unloved below my painting station - the Great Spined Dragon. I had undercoated it red sometime back but had been put off by my feelings of inadequacy towards actually painting the thing. Taking on board what I had learnt about not using too many colours, I used the green from the British Army painting set and the yellow from Army Painter and set about getting the dragon restarted.

Here is an early WIP for you all. And if you don't mind, my daughter is having an afternoon nap at the moment and I am off to work a bit more on this wonderful model! 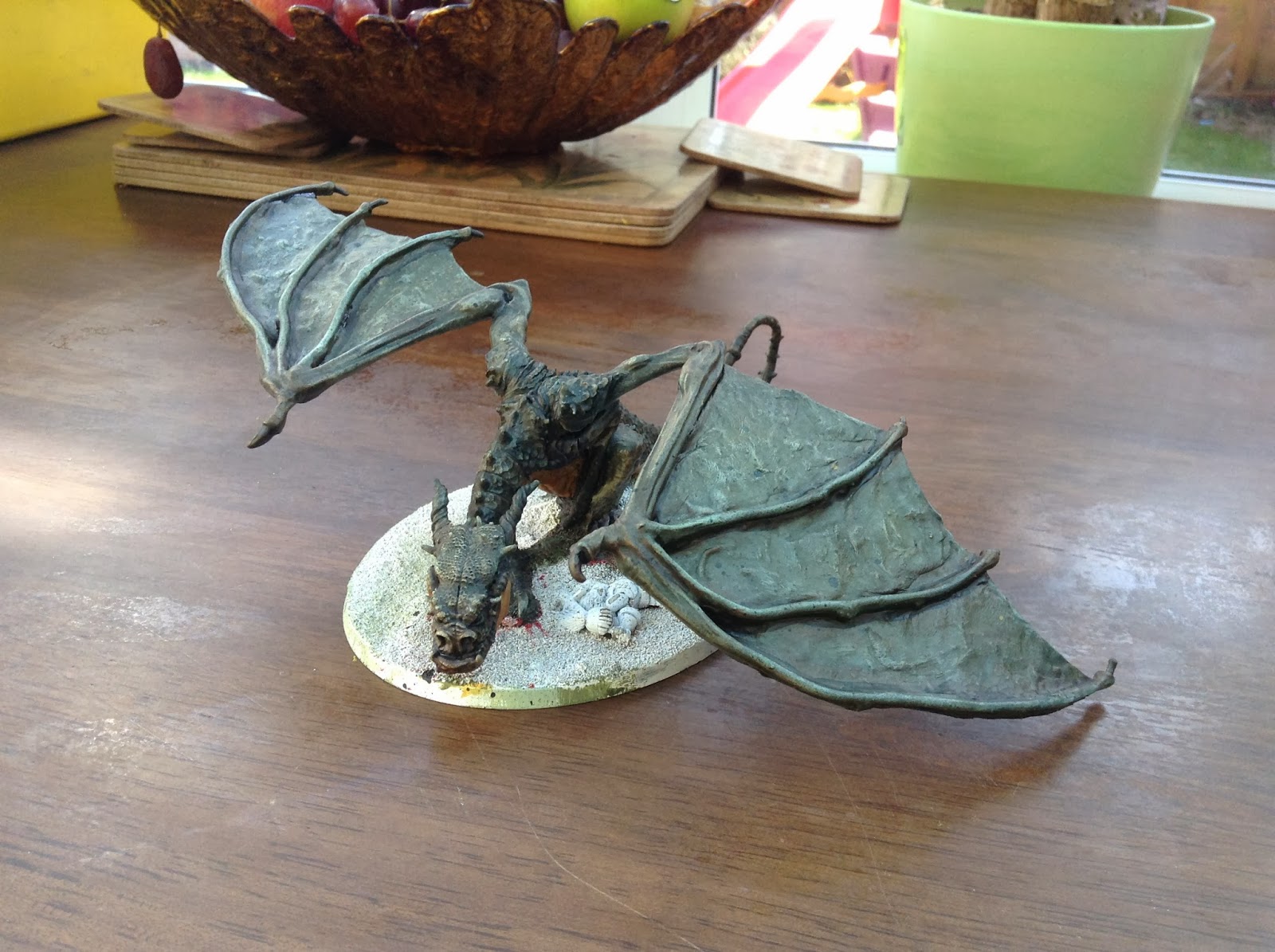 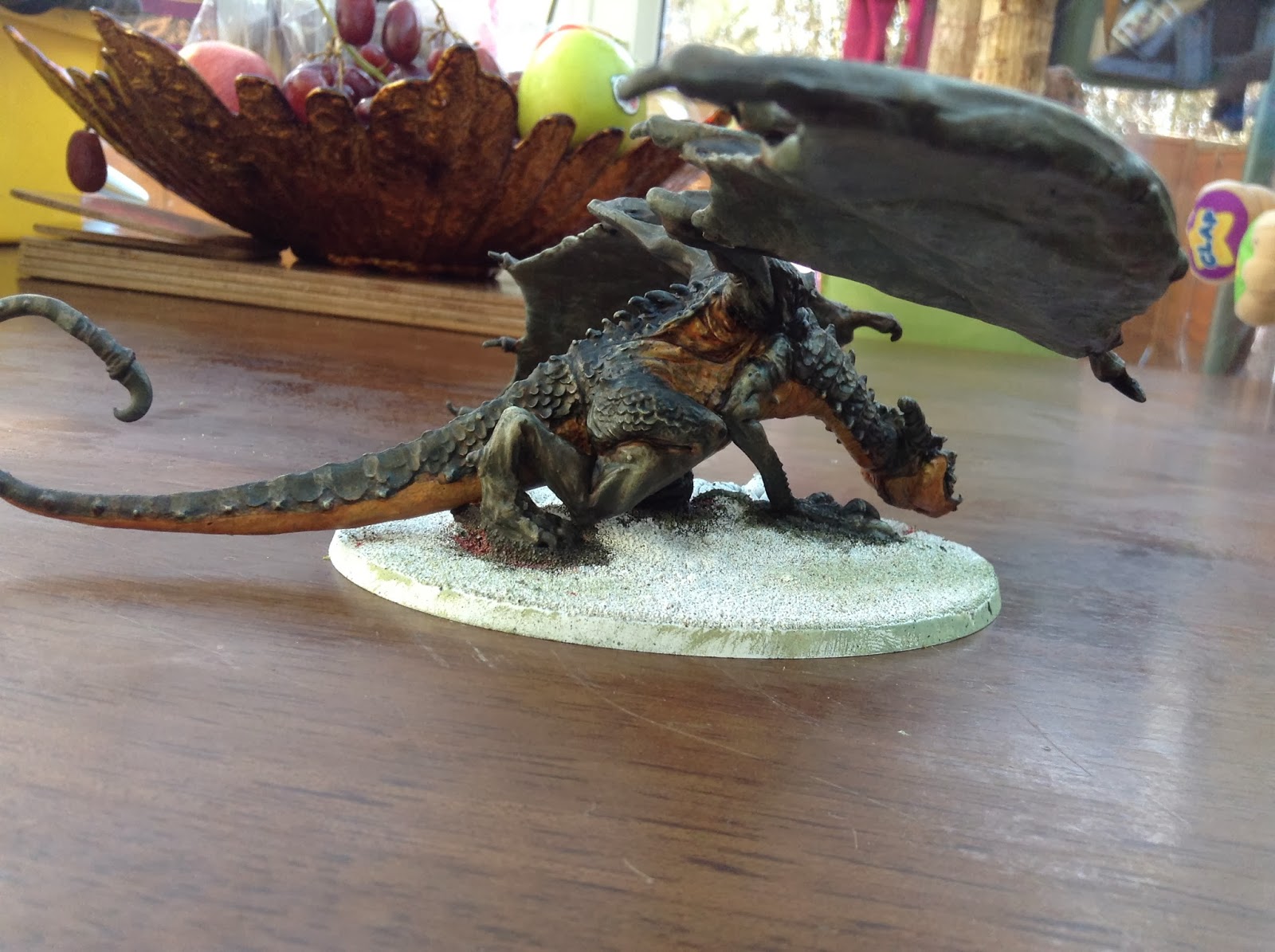