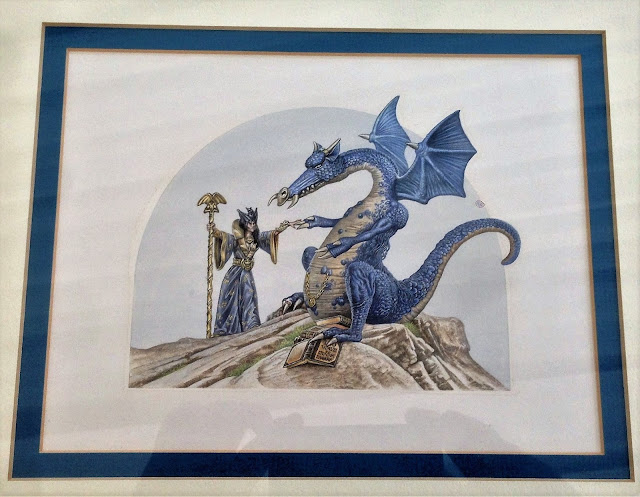 My wife forces me to watch Game of Thrones. I can tolerate the programme I guess, but it suffers terribly (despite the endless grinding of a million dollar marketing machine) from not being as good as Lord of the Rings, in both print or celluoid. Not being as good a wide range of other fantasy in fact. Much like the Harry Potter novels; how much is the global spread a result of the author's skill and imagination and how much the result of a relentless, exorbitant and cynical advertising campaign?

The dragons are rather blandly conceived too, feeling more akin to the computer-game polygon constructs of Skyrim than the mythical, grandiose flying lizards of yore. Thankfully, the beautifully defined dragons I saw preserved in art during the Oldhammer Weekend were quite the opposite. Colourful, characterful and beautifully executed by an artist Bryan Ansell couldn't really remember. Anyone know the chap's name?

If the above image rings the bell of recollection that is because this painting was printed on the front of the famous Blue Dragon boxset released way back when in the 1980s. To ease those memory synapses, here is a quiet reminder of what that packaging looked like. Any of you buy one of these? 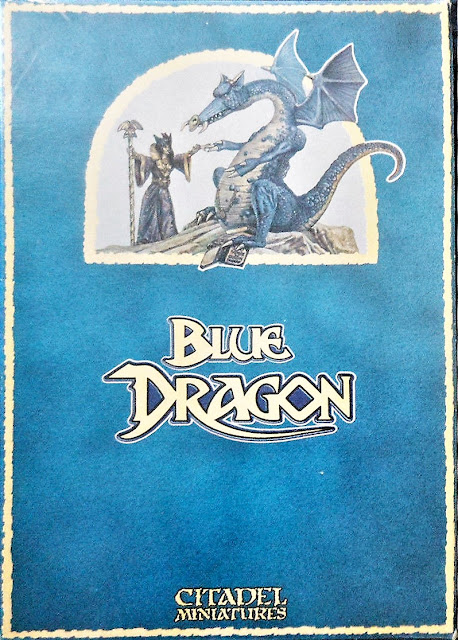 Some years ago, the award winning Steve Casey snuck Welshly into Stoke Hall to capture its collection of ancient metal figures. This was in the days 'before Oldhammer' and happily the Citadel Collector snapped away, serendipity resulting in the very same dragons (the White Dwarf studio ones) being captured digitally. And here the Blue Dragon is, in all it's damaged, dusty glory.

No sign of the sorceress, mind you. Perhaps she married a dothraki? 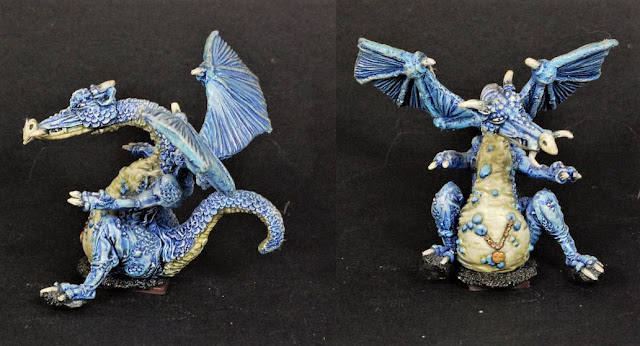 Back in the 1980s the Blue Dragon may have been a popular purchase but it wasn't the badger's nadgers of the box set world. That title could only be bestowed upon the Great Fire Dragon - after all, we all know that 'red wunz goez fasta!'

Well, that painting was also on display... 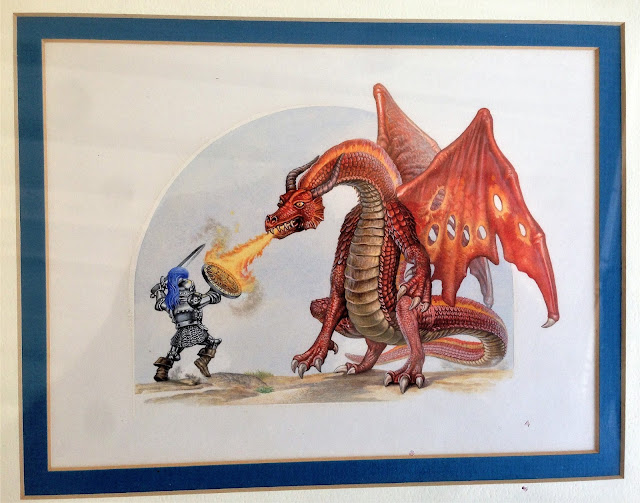 You probably remember this dragon as 'the one with those bloody hard to paint wings with bloody holes in them' model. I never could quite fathom the purpose of the holes - had the dragon been suffering from a dose of wing rot? Or perhaps the majestic, red beast had a run in with a eighteenth centure ship-of-the-line who mistook the red wings for the sails of an enemy ship? Pummling a dragon with chainshot certainly conjures up some exciting images, does it not? 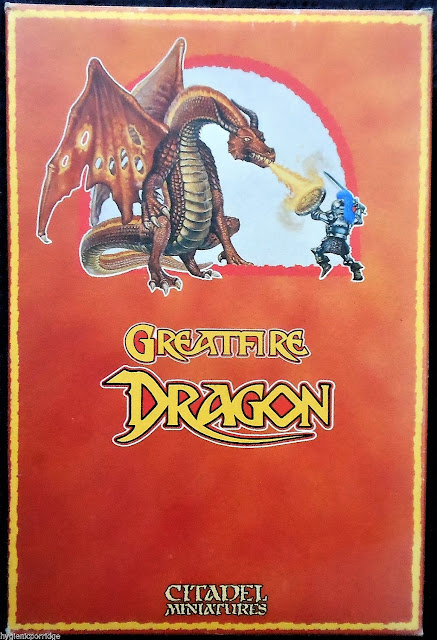 It seems that the painting was flipped when the packaging was put together and I can't help wonder how such a trick was pulled in the late '80s without all the computer trickery we have now. It still remains the most striking of the three boxes, and the bright red colouring certainly cements this. The pose of the heroic knight also helps, bravely (or perhaps foolishly) deflecting that bolt of flame with his shield. 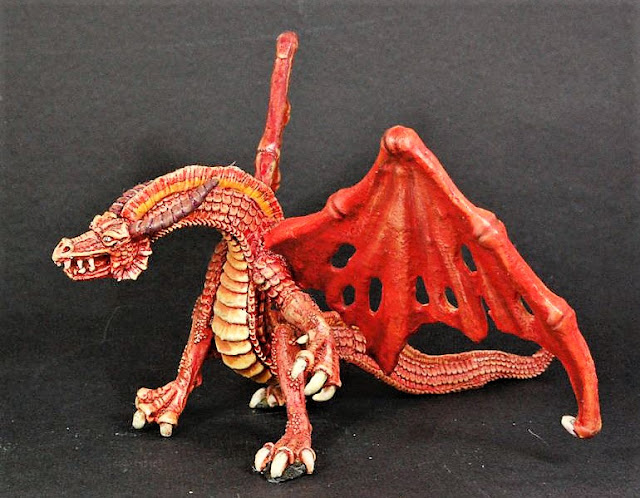 As you can see from another one of Steve's photographs the original model has also survived, only this one seems to have been posed like a mid-ranking doorman looming large over the threshold of a Nottingham Greggs, rather than a sophisticated and arcane creature. Nice paint job though, don't you think?

The Green Dragon's painting is by far the superior piece of art, at least in my opinion. And I love the characterisation of the dwarf, nipping off to safety carrying his no doubt looted loot. Looking at him in more detail made me realise that he is somewhere in my leadpile, sadly without the Green Dragon, so he must have made good his escape. 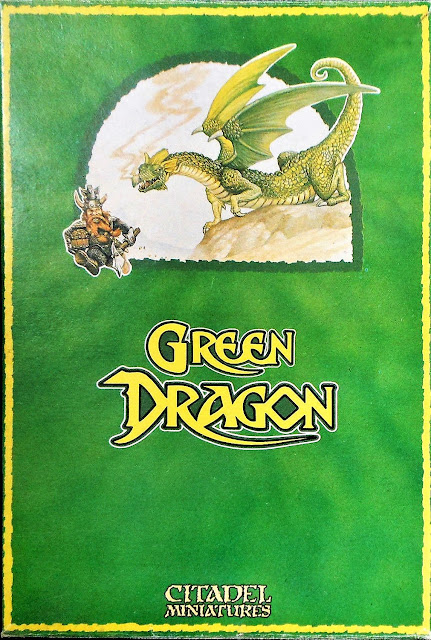 The artwork remained unchanged on the packaging of the Green Dragon and the model itself is the most closely matched of the three. As you can see below. 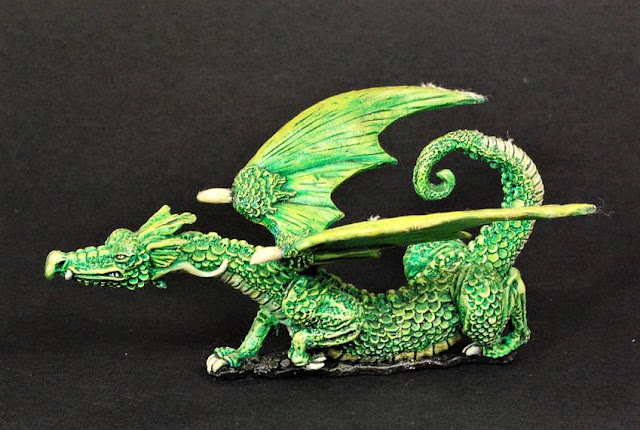 Looking at the three models makes me wonder how they were originally based, considering that all three of them seem to have a grey, lavafield look to them. I didn't notice these models on the new and improved shelves of the Wargames Foundry, but that doesn't mean they are not there.

Did anyone spot them?

Popping over to Orclord's Solegends in always a rewarding experience. And his collection did him proud once again when I found this lovely photograph of the same menagerie, complete with infantry figures. A lovely collection of dragons I am sure you would agree, and not a gratuitous nude scene in sight!