Acceptable in the '80s: Third Edition Wardancers rules and miniatures

The hall had the familiar scent of all public buildings of its type; dust, damp and the overpowering smell of barely disinfected toilets. Condensation clung lazily against the Crittall windows as the silent, shuffling men wandered despondently to the vacant chairs that formed a rather haphazard circle in the centre of the room. Here and there, an aluminium chair leg scrapped loudly against the 1960s wood pannelling that made up the uneven floor, the sudden noise startling the room's occupants into further despondency...

In time, they had all settled themselves down on their seats and unknowingly toyed with fray hems and awkward zips as they made the most of the primitive comfort. There was a short nervous cough and a short, nervous man stood unsteadily to his feet. He cleared his throat and then spoke to the room at large.

"I am a leadhead and I last painted a miniature over two months ago..."


If there was such an organisation as Leadhead's Anonymous, I am sure that I'd be their shining star after recent times. After months of living the life of a 'House Husband' (read, plenty of time for painting) and recently starting work again as a Primary School Teacher in East Essex (read, no time at all for painting at all) I would exhibit positive signs. The modelling table stands unkempt and uncared for; with the rows of models untouched by hand or paint, packages left unopened in great number while the astonishing collection of late 80s and early 90s GW literature slowly moulders away.

But no more! No more I say...! I must force myself away from that dreaded, souless circle in that miserable (and of course, thoroughly metaphorical) village hall and get back to business, even if its only going to be for one day a week!

What to discuss then?

If you remember, we are currently working through the releases and rules discussed in issue 96 of White Dwarf. That's December 1987! And mind, 80s haircuts are certainly popular in the forests of the Old World judging by some of these Jes Goodwin classics.

Let us look at this set in a little more detail. The first thing that strikes is just how lovely these models are. They have all the graceful, lithe shape that you'd expect from the great Goodwin and the models look very dynamic and purposeful when compared to the elves we discussed last time. I am pleased to say I have a large number of these sculpts in my collection and they will (one day) form a considerable part of my wood elf army (when I get around to starting it). My favourite model out of this collection? Without doubt Gildorn (who, sadly I do not yet own). I love the pose, the armour design, the position of the weapon and the hair cut that resembles something Gaz Top (remember him?) would have constructed out of hair wax if he had been an uncontrollable acid casualty.

Painting wise, we are continuing to see the shift away from simplistic schemes and techniques towards something more 'Eavy Metal. The blending on the flesh is certainly something that I would hope to emulate though I have never been a fan of the greys used on the elves at this time. For me, they should be clothed in the mellow shades of summer or the serene colours of autumn rather than the ubiquitous tone of the conservative politician - think John Major circa 1992. 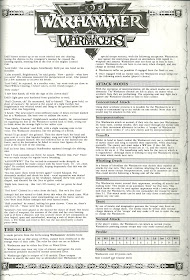 I have also included the rules published in the issue, you know, back in the day when GW understood the importance of giving full rules away with a range of new models so you could just buy them, paint them and field them without the need of buying this month's version of the associated army book! I love the fact that the wardancers have so many attack modes. Deadly!