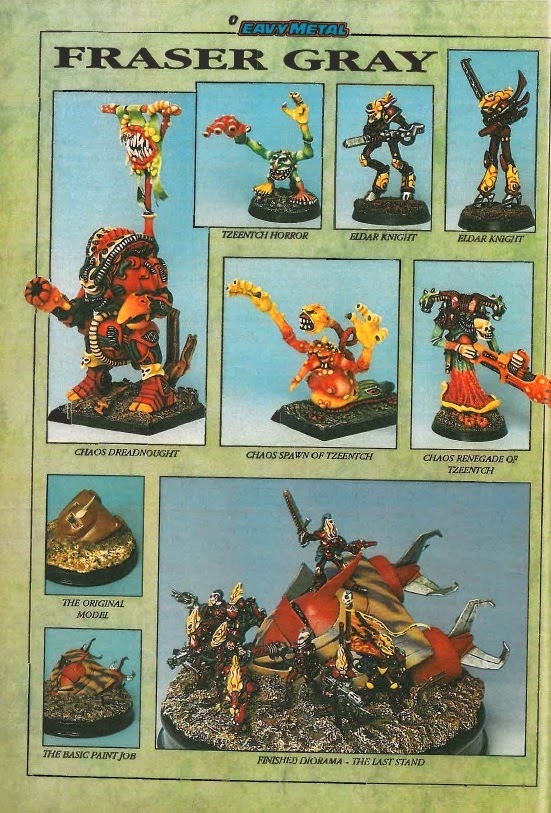 If you were anything like me, then the blue marbled pages of old school 'Eavy Metal were the first pages you thumbed to when you got your hands on a new issue of White Dwarf. Its odd looking back from where we are now in the twenty-first century in the midst of the age of the internet. Its just so easy to access information. Pick a theme, type a keyword into a search engine and you will be confronted with hours of text to digest at your whim.

Back when these pages were put together, print media was still the only real source of visual and written information and the wait between issues of White Dwarf could be long and tiresome. Still, after absorbing whatever the cover art offered, my eager thumbs would flick through to the photographs of painted miniatures. It was really what I bought the magazine for and I would gaze at the images for hours in confusion about why my attempts at miniature painting did not resemble those of Mike McVey or Tim Prow!

Twenty-five years later and my painting is still not resembling those of the 'Eavy Metal painting team back then but I am still trying. And so, the old 'Eavy Metal article pages still fascinate and encourage me in a way the more modern presentations do not. One thing that I enjoy about these old articles is the breadth of style between different painters and the studio and guest painters who contributed work. There is always a lot to see and seldom do the pages focus on just the latest releases. A new model may well share space alongside something from the early 1980s!

The first page I have shown above highlights the work of the GREATEST of all miniature painters, Fraser Gray. Now here is a gent I have written extensively on in the past and his work still amazes me all these years later. This is a spread of models that I think we have seen before here at Realm of Chaos 80s but I am sure that you will not mind seeing them again. 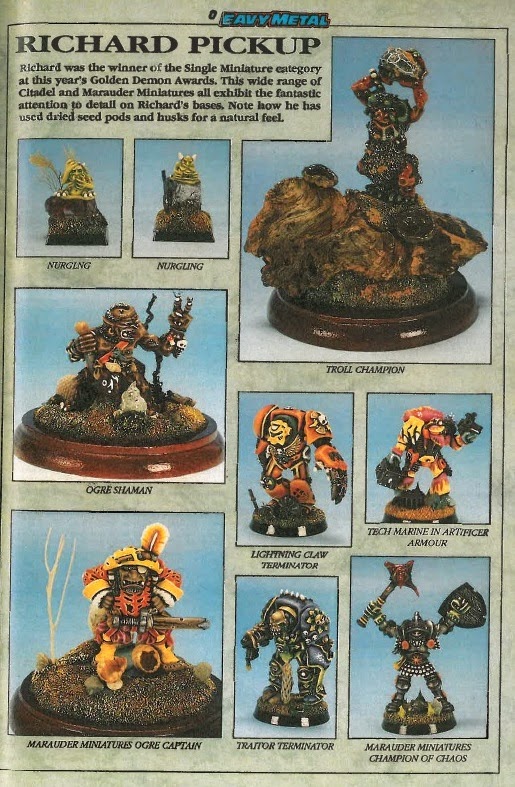 Richard Pickup is a name that jumps out from the Fantasy Miniatures books from the late 1980s and very early 1990s and is someone we haven't discussed here before. At first glance its Richard's bases that jump out at the viewer, largely due to their realistic tones and use of natural components. The Troll Champion at top left is a prime example of this technique and isn't something I have explored myself beyond using a few pieces of slate on a base.

Mr Pickup obviously liked his Big Uns as there are two very well painted ogres on show here too. The top example is the Shaman figure by Jes Goodwin as is part of his incredible ogre range from the mid 1980s, the second, below it, has been taken from Marauder's very different take on how an ogre should look. I love the dark browns to be found on the shaman's skin and the way they merge in with the base to create a pleasing finish. I found brown quite a challenge to paint and get right, especially on bigger models. One problem I find is created by adding too much white to the mix as this results in a rather washed out look. The ogre captain is wonderfully bright and contrasts very well with the dark skin tones we have just discussed. The power of the pose, with its shades to Henry VIII and Hans Holbein, along with the colour harmony behind the scheme make this one of my all time favourite paint jobs.

Its nice to see some Rogue Trader stuff on show as well as the fantasy models and his marines are just as good as his ogres, if not better. The techmarine stands out from this bunch due to its original and intriguing colour scheme. I love zany '80s armour styles like this but find them really fiddly to create myself.

The stand out models on this page are, for me at least, the two Nurglings painted as individual models. Despite their small size, Richard has been able to cram everything his is good at into the models. The natural bases (cleverly raised up to bring the model more attention) to the dynamic use of colours. I don't think you will see Nurglings shown in this way in any other contemporary publications. Great stuff. 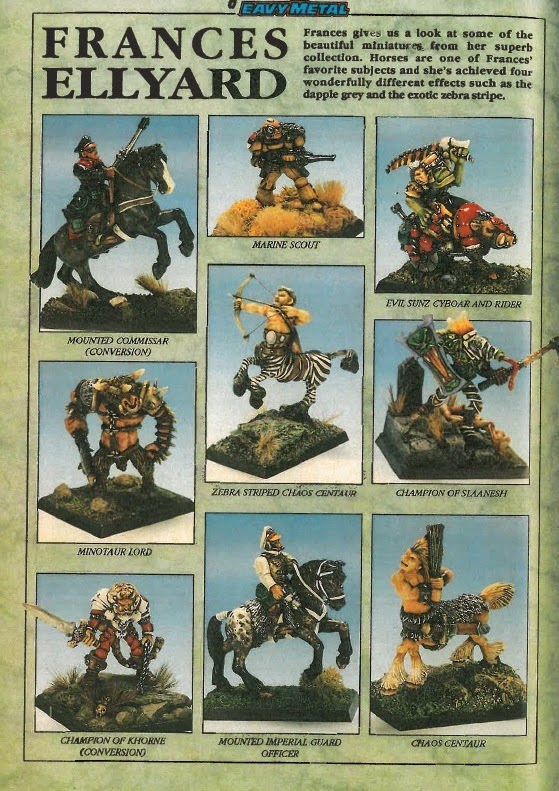 Francis Ellyard was very good at painting horses, as this page illustrates, and it seems she was also a dab hand at the scenic base. Like Pickup before her, this page gives us a great range of models from both of the Warhammer Worlds, and the Rogue Trader Commisar and Guard Officer are excellent. They also show just what is possible with those chunky old plastic Citadel horses - note the converted tail on the Imperial Guard Officer!

She clearly spent a great deal of time researching the patterns that appear on animals. The speckled effect on the horse we we just discussing is brilliant and something I would like to try myself at some point. But its is the zebra stripe effect employed on the centaur and Slaanesh champion that really impresses. Getting the stripes looking right takes real skill as you cannot just paint random lines on a white horse and hope for the best - believe me I know this to be true, as I have tried it!

My personal favourite here? It has to be the Space marine Scout. I love the way that the camouflage painted on the figure matches so well with the scenic base. I can tell you, with the materials at their disposal back then, this wouldn't have been as easy as just buying up a few packs of basing material and just sticking them on! 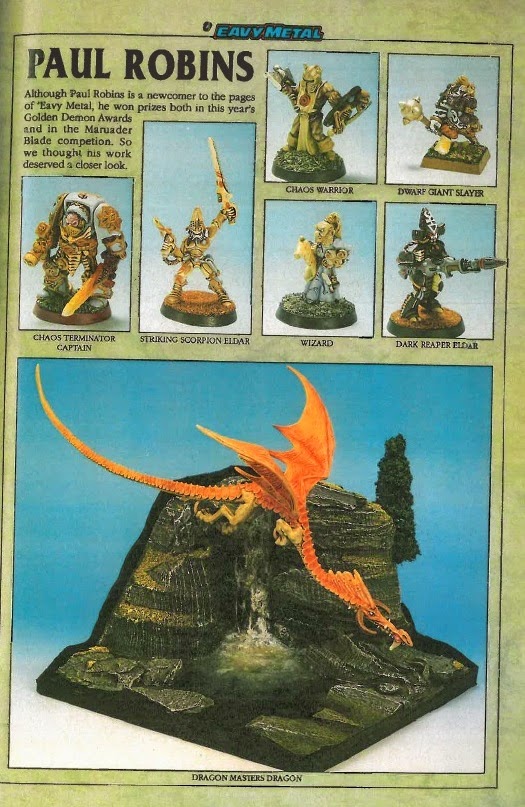 Paul Robins is another newcomer and has a style that reminds me of Steve Blunt's work. The smooth muted colours seem to merge together and produce a warm, living figure ready to step off the base and into some adventure. This pages shares an eclectic range of models from his collection but is dominated by that fantastic dragon and its outstanding scenic base!

Its like something from Skyrim - only twenty-five years too early. 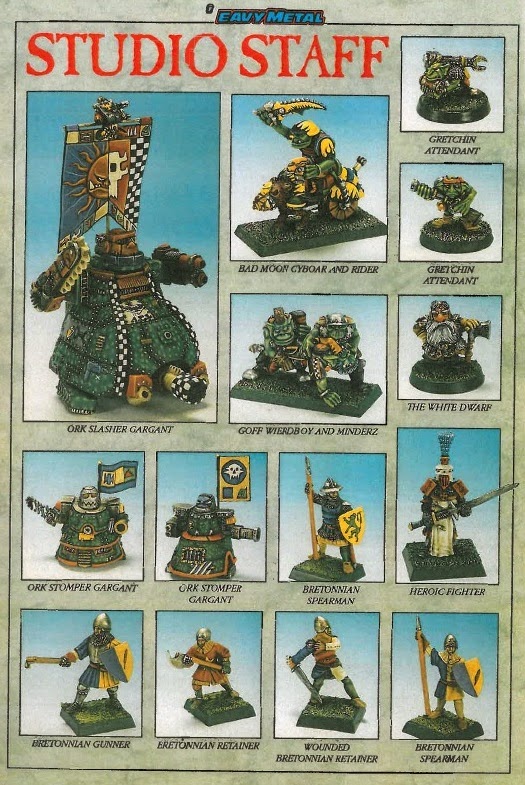 With the guests out of the way let's have a look at what was going on in the studio at the same time. As this was the age of the Ork books it is no surprise to see quite a few goblinoid models on show. The Gargant dominates the page and just looking at the model reminds me about just how satisfyingly heavy they were to pick up, a feeling that modern resin models can only compete with their fragility. The smaller Gargants bring back fond memories for me as the group I played the Enemy Within with were also keen players of Space Marine and we had a fair few battles with these.

The Gretchen and Weirdboy and Minders are great models, full of character and invention but the plastic Cyboar is just hideous, just like much of the plastic ork range that was released around this time. Ugly multipose things that they were.

Rather strangely, the White Dwarf model from some years previously turns up on this page. An unexpected surprise for me considering I painted my version not so very long ago. As does an old Lord of Battle. They just go to show that a classic model is a classic model and deserve painting.

The stand out models on this page (but sadly not so the paint jobs) are the Bretonnian models that may or may not have been connected to the Medieval game that was being mooted at the Studio around the same time. This range, by the Perry Twins, remains the best Bretonnian collection ever produced in my humble opinion, so its great to see them here. 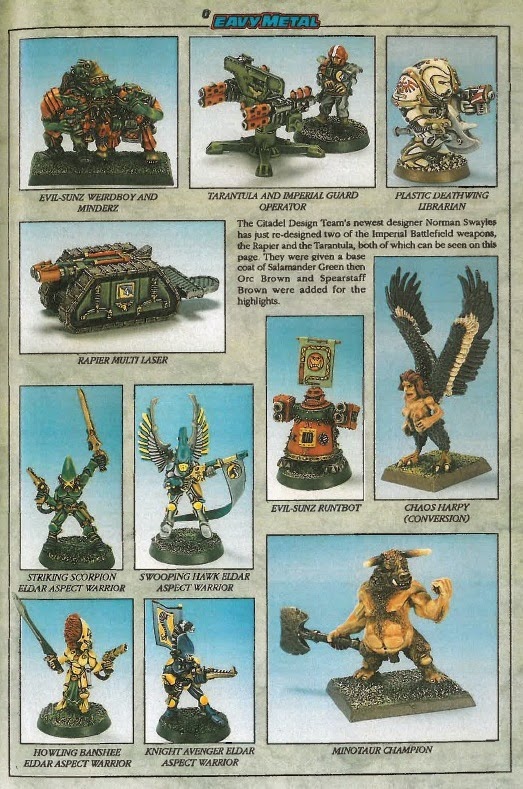 This page is of note as it mentions Norman Swalyes, a member of the design team who I have not really heard much about. It seems that he produced an update to two of the older Rogue Trader models - namely the Tarantula and the Rapier. I was never one for big guns and vehicles but these models really do show how more closely related they are with modern 40k than Rogue Trader, don't they?

The Eldar, painted by Tim Prow if I am not mistaken, have been seen before in these discussions as has the plastic terminator models from the Genestealer expansion for Space Hulk. The minotaur champion is an old, old model and is not as good as the Colin Dixon or Aly Morrison versions we have seen before. I do love the Harpy conversion here though, as it shows us how a very simple change, in this case the wings, can create a very different model indeed! 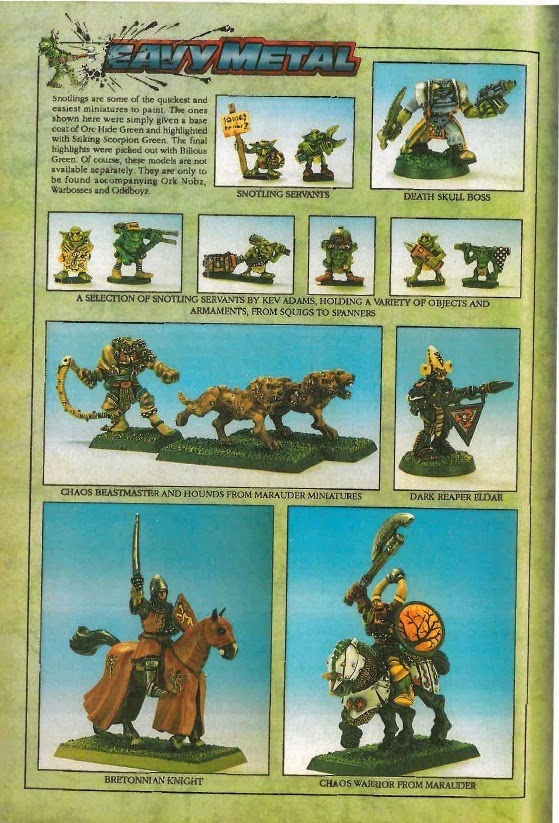 Again, many of the models on this page have been seen before and have been taken from both the Citadel and Marauder ranges. They all look a bit static and unimaginative in my opinion, especially when sharing a page with the 40k snotlings. Don't they steal the show, utterly? They look like a lovely range of models that I know absolutely nothing about but by the looks of it, A lot of the ideas on show here are still being recycled for modern tastes in the gretchen. 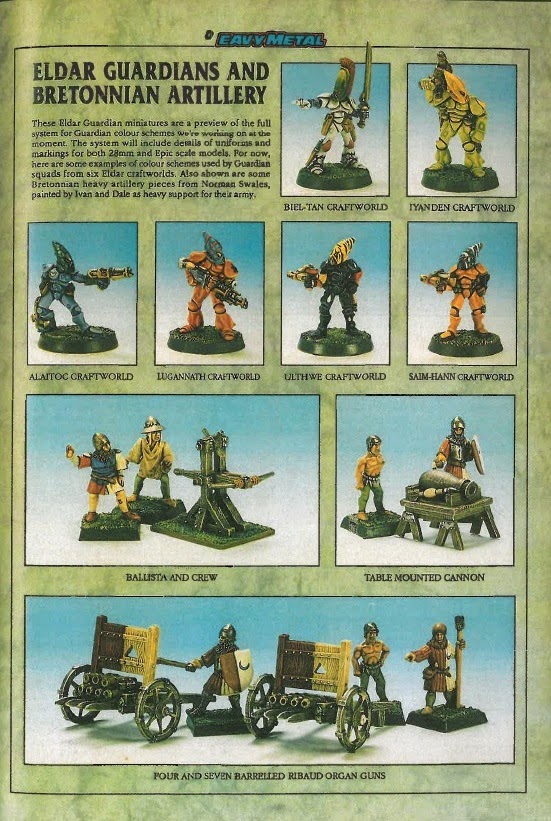 This final page shows off some of the more alien looking colour schemes that are possible with Eldar models, These all look rather impressive and varied to me, with the green and yellow Iyanden and the orange and blue Saim-Hann standing out most strongly.

But it is the Bretonnian stuff that once again draws my eye. Aren't they wonderful? As I have said before, as have many others, for fantasy to be believable it needs to be based in some way in reality. The Perry Twins clearly understand this rule.

Sadly, too few others seem to appreciate it these days.