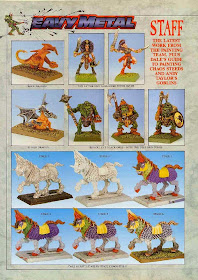 Welcome to another journey through the pages of old school 'Eavy Metal. This time we will be pondering the models shown off in issue 122 of White Dwarf. The first page gives us another one of those step by step paint jobs that were a familiar site in the magazine during this period. A truly garish example it is too with some rather sickly colour choices. Not a scheme I would use myself the the quality of the painting of the actual horse cannot be denied.

Bob Olley's orcs really have the moment to shine here with a really great paint job and a rather interesting green tone for the flesh. I love my goblins with a tint of yellow, but these brutes look superb. I must confess, these models are not one that I am overly aware of and its a real pleasure to discover something new in these old pages. Its unusual to see dragons in WD at this point, so its a pleasure to see the mini rock dragon and the looks nothing like Nick Bibby's masterpiece Spined Dragon. This is a real shame, as a smaller version (perhaps a baby?) would have been fantastic. Rather unsurprisingly, a couple of the Marauder Witch Elves that we discussed recently make an appearance too. 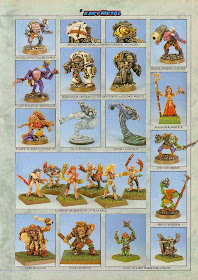 A fantastic gallery of models awaits us on this page. The terminators catch the eye immediately and they are quite frankly superbly painted. There is plenty of iconography here but with such things still in development there is plenty of room for artists interpretation. Random genestealer hybrids appear (again) and its makes you wonder of the 'Eavy metal team were obsessed with them during the later '80s as they appear so often. I am really impressed with the subtle pastel shades employed on the daemonettes and I feel that this kind of look its much better than the 'liquorice allsort' colour schemes that you see elsewhere. The orks are okay I suppose and the ogres are interesting but its the painting on the pre-slotta elementals that really impresses me. The colours are very natural in their tone, and I can practically smell the salt on the water daemon! 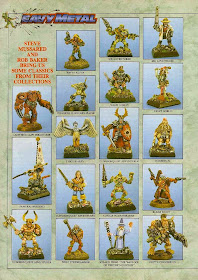 Now, Steve Mussared is a name we have covered before, but Rob Baker is a new name to me. Both share a similar style and its hard to say who's miniatures are who's really. One of the jobs of the Oldhammer scene is the varied interpretations of models when it comes to painting. The same model often looks strikingly different depending on who painted it. I always found the differing styles used in 'Eavy Metal and inspiration. I love the samurai warlord and the ogryn conversion on this page but note must be made of the unreleased plaguebearer in the centre of the page too. 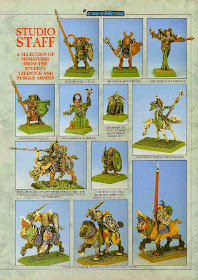 A gorgeous range of classic chaos models here and these images will no doubt inspire me further when I begin my Tzeentch and Nurgle chaos armies in a couple of years time. The colours are really very chaotic here and just go to show how bright colours can be used for quite dramatic effect. The conversions really stand out for me here, especially the Honour guard and the Nurgle Necromancer. Beautiful constructed and painted models.