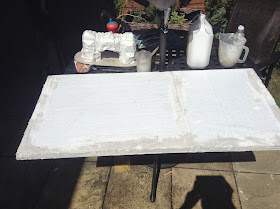 Day two of my project to build a wargames table from the dross I have found in the garage. Yesterday, I found two old plasterboard pieces and a stack of polystyrene among other things and got as far as finishing the base of the first board. I was using the heat of the sun during the day to fast dry each stage of the board, which really sped things up. I was worried though that the wife might get a bit tetchy if the garden started resembling December with all the polystyrene bubbles, so I moved into the garage. 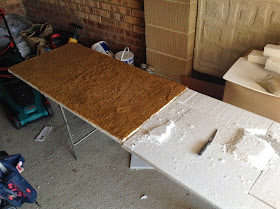 Doing it old school, I used an old wallpaper table to balance the boards on and began to build up the second table. This time I caved in to the temptation of keeping things flat and even and added a few in situ banks (they are too small to call them hills) and a depression for the source of a natural spring or underground river. I coated the the first board in the builder's sand before covering it with an additional coat of watered down PVA. Leaving it to dry in the sun ensured that it is now rock hard. 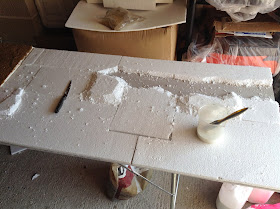 The second board has been left to dry before plastering tomorrow. I will tidy up the edges and ensure that once side fits smoothly with the other so there are no gaping chasms when the two sections are joined together. I am imagining that this is where the hamlet I intend to include will reside, close to the water source, and I have already got three buildings in various states to add when necessary. In my mind's eye, I would imagine that hamlet to be built up around a coaching inn, so at some point I am going to have to build one. Most of this will be plastered tomorrow. 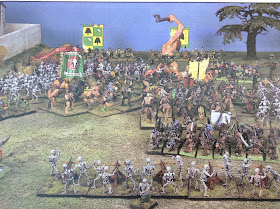 I have also done a bit more research into the inspirational table. I have discovered from various channels, that the board in question was built by The Duke, a Bristol based gamer from the 1980s who's tables where superior to anything GW had at the time. He was paid for its use in the WFB3 rulebook so the story goes! 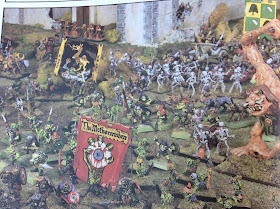 Looking at the surface of the board, I can see that its been painted in a variety of colours and then had flock (again, in differing shades) sprinkled on top. I have lots of static grass so will be using as I am trying not to buy anything really at this stage. 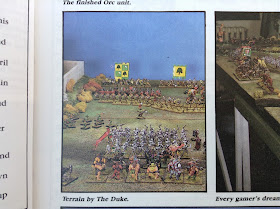 The creator of this fine table is even credited in the rulebook. I wonder who all the models belonged too? Anyone know? 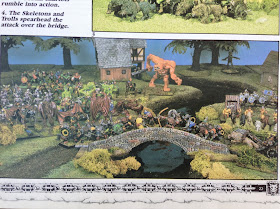 Having caved in about having a water feature (I found a tube of GW water effects in the garage too) I will also be stealing the idea of adding a road. Here you can see that the road is made up of an unflocked painted surface. And this is something I am keen to emulate when the time comes. 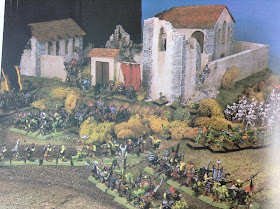 Plenty of lichen used on this board! I love the stuff, but find that it dries out quite quickly if you don't look after it very well. The key to using it well on a gaming board is, like many other things, all a question of where you position it. I have no plans for a ruined monastery at this stage. A hint for the future. Bushed made from wire wool? Rubberised horsehair? Its certainly not the brillo pad specials that I had built before.

Well, with today over, I hope to get a layer of plaster over that second board tomorrow and give it a good coating of sand. Once that is done, I shall move on to basecoating and getting the soil painted up. I don't have much paint about the house, so I might have to have a look about in the kids arts and craft sections at the local shop.